One hobby that I need to get back into

During some smalltalk at a recent beer dinner event, a tablemates said one of her hobbies was “close friends”, and I was really struck by that sentiment. As someone with the reputation of picking up and dropping hobbies with frightening regularity, the idea made me realize how much I’ve neglected that particular hobby recently.

The past few months have been a whirlwind, as were the months before that, and the months before those. That’s not an excuse, it’s a cycle. Years ago when I was transitioning from my (stable, boring) career to this grand adventure I knew, academically, that it would monopolize my focus and attention, but I didn’t fully understand just how all-encompassing it would become. I’ve dedicated myself to pursuing this dream in a way that I’ve never thought I was capable of, but it’s come at the cost of intimacy with many of the people I care about.

Last weekend it was especially prominent as, while Julie jaunted up to Santa Barbara for a bachelorette party, I traveled in the other direction to Oceanside for the baby shower of one of my oldest friends. I’ve known Cameron since 3rd grade — well over 25 years ago. The party was also attended by a half-dozen friends from middle and highschool, and it was a trip. 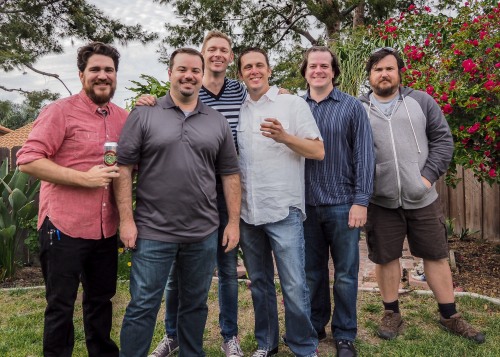 As the fates would have it, two of my closest friends from college were also in Oceanside for the weekend. I’d only seen Greg and Christine a handful of times since they moved to Oregon over a dozen years ago. We caught up over some LA beers and SD BBQ. It was a long drive home to LA after dinner and I spent much of the traffic-snarled journey reflecting on the nature of these platonic bonds in general and some friendships past and present in particular.

It’s those past ones that get to me.

It’s one of those inescapable facts of life that friendships don’t always last forever. People change, priorities shift, geography and careers and kids and money all weaken bonds of friendship. Sometimes there’s painful drama, but — in my experience — it is far more common for people to just drift apart. Facebook and the modern obsession with social media is both an accelerant of this drift and an analgesic against the emotional pains of it. It doesn’t feel like I’ve lost touch with so many dear friends because I see them on Facebook and like their pictures and stay updated, but those connections are virtual. They are not real bonds forged with eye contact and laughter and hugs.

I’m lucky that I chose to reforge my career and my identity within the craft beer industry. Beer brings people together in a really special way. It builds friendships, and I’ve made dozens of new friends through my explorations of craft beer in Los Angeles. But making this path sustainable has been far more effort than I ever expected, and I have to live, eat, breathe, and sleep in the beer world for there to be even a chance of this working as a long term career.

I’ve had to mortgage old friendships to live out my dream. I’m hardly the first person to go through that, and maybe that’s just the normal arc for thirtysomethings today. I’m really thankful that my industry is so close and that I’ve met so many new people, but as a “journalist” (I still feel the need to couch that in quotes — I wonder if that will ever go away) I can’t develop deeper friendships with people in the industry. I need to keep a professional distance. I’m left with close friends who’ve drifted farther than I’m comfortable with and new friends who I kept at a distance. That isn’t something that I anticipated; I didn’t add it to the “cons” column of the lists I made when deciding what path to take. Yet, it’s been one of the most difficult aspects of this whole transition from rat-race to dream-job. Without Julie in this boat with me I don’t know how I would handle this degradation of meaningful personal connections in my life.

The idea of friends being a hobby resonates with me because I’m acutely aware that cultivating and sustaining friendships requires time and energy and focus. Time, energy, and focus — three things that are in ever-shortening supply in our modern world. As soon as I get some to spare, whenever it is that I want to spend some on a hobby, I’m going to spend it on friends.

My sincerest apologies if you’ve felt I’ve marginalized our friendship or slighted you. I’m sorry if I’ve been distant or unavailable or unresponsive. Not to sound melodramatic, but everything is so much harder than I anticipated. Striving to live a life you’ve always dreamed about is really rewarding, but not a day goes by where I don’t weigh the rewards against what I’ve lost or given up.

Only time will tell how it all balances out. I think I’m ok with that.